Are Alzheimer’s and Dementia the Same?

Alzheimer’s and dementia are cruel diseases that are all too common in the elderly. Today one in three seniors dies from Alzheimer’s or another type of dementia, which is a group of symptoms that cause a decline in your ability to think, continue with normal daily activities, and even to relate to people that you may have known for years.

Let’s look at Alzheimer’s disease and its relationship to dementia. Are these diseases the same? How can you spot the early symptoms? We have answers that will help you understand these debilitating conditions.

Is Alzheimer’s Disease the Same as Dementia?

While Alzheimer’s is a disease of the brain, dementia is a syndrome that generally causes a decline in mental function and memory. As dementia symptoms worsen, it can severely impact a person’s life and their ability to function.

The word “dementia” is used as an umbrella term that Alzheimer’s disease falls under; in fact, Alzheimer’s is the most common type of dementia.

What Are the Symptoms of Alzheimer’s Disease?

Alzheimer’s is a degenerative brain disease that causes the gradual cognitive decline of a patient afflicted with this disease. Alzheimer’s disease causes the death of the nerve cells in the brain and the loss or atrophying of brain tissue. This affects nearly all of the functions in the body.

The first sign of Alzheimer’s is a gradual loss of short-term memory. It’s a progressive illness, which means it worsens over time. After a while, the symptoms can progress to:

Eventually Alzheimer’s disease can cripple the brain so severely that the patient’s automatic functions of breathing or the heart beating are affected. As people weaken, secondary infections of the kidney and lungs, strokes, and other problems can occur.

In the final stage of the disease, Alzheimer’s patients are often unable to perform basic movements, communicate, or maintain control of their bodily functions. Many times, they cannot feed themselves or even chew and swallow food without help.

How Does Alzheimer’s Disease Progress?

There are seven stages on what doctor’s call the Global Deterioration Scale (GDS) of the degenerative dementia known as Alzheimer’s:

The progression of these steps varies by individual. Alzheimer’s disease is also not the inevitable result of aging. People can live long, healthy lives without ever experiencing the dementia caused by this brain disorder.

Are There Different Kinds of Dementia?

Alzheimer’s is the most common form of dementia but there are other kinds. It is even possible for people to have multiple kinds at once. These different forms include:

How Is Dementia Treated? 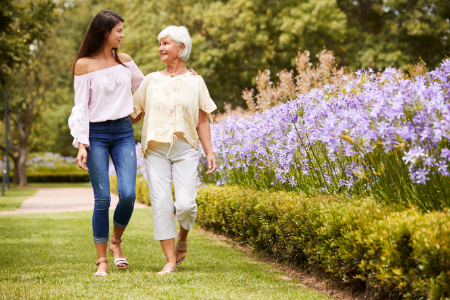 The treatment for dementia depends upon which disease caused the disorder. Dementia can even be caused by a vitamin deficiency, so treatment with vitamin supplements may help to reverse or slow the effects. There is some evidence that vitamin D may be linked to Alzheimer’s and dementia, but more research needs to be done.

Progressive dementias, such as those caused by Alzheimer’s disease, cannot be halted. However, their progression may be slowed and some symptoms such as memory loss and confusion may be relieved with medications.

While research is ongoing, we currently have four primary medications that your doctor may prescribe, depending on what stage of dementia you’re experiencing:

If you’re a family member of someone diagnosed with Alzheimer’s disease or another form of dementia, you can improve their quality of life by:

We know how hard Alzheimer’s and the accompanying dementia symptoms can be. AMA Medical Group is devoted to a lifetime of care for our patients. If you or a loved one has been diagnosed with a form of dementia, please contact us. We can help you develop a plan for dealing with all stages of the disease.